Frogs. Croaking and creaking and getting busy. We heard them the first time yesterday. We'd already found several huge tadpoles by bucket seining (if you can call it seining). I put them in a large vase in the kitchen and they're going through several large lettuce leaves a night. I can't wait until they start sprouting legs; it's just a crazy transformation to watch.

The ducks and turkeys have settled in well, though I have to say it's an odd experience to see ducks roosting up in the rafters of a building. Still, good it's a fox avoidance technique, don't you agree?

Duck finally worked up the nerve to nail one of the hens today. It took a surprisingly long time, but maybe I'm just used to the chickens. On! Off! ruffle and go! I hope that the hen will start laying in a place I can find; I'll maybe give those first ones to a friend who had a bad duck year. They got me started with Duck and his first two short-lived wives, so the least I can do is toss a few eggs at them. I won't be able to incubate them in the house until May since I'll be gone for 10 days this month.

I finally found someone who has built a hoop house the way I'm planning on doing it, so I have pictures and descriptions to go by to help me out. I won't be using quite the same materials, but it should work out the same. I'm also going to build the chickens a hoop tractor; I think we should be able to fit at least 50 birds in each tractor, and that would be a great way to start to revitalize a good part of the pasture.

Once I get back to town, we'll have our pigs delivered, and I'll start looking for a couple of market lambs. I'm going to take the small flock class at Shepherds Harvest, if I register in time. I wish I could have taken something like it last year, before the wheels fell off of my sheep keeping.

Oh, hello. What? I can't hear you. My ears are filled with cobwebs.

Um, er. Yes. Well. Hello! I can see by my handy 2009 calendar that it's been a while. There are so many happenings chez nous, both good and tragically bad.

To the good: Jabba (who has morphed into Chewie with her amazing Wookie impersonations) is walking. And she's 16 months old. What! She isn't quite talking, I don't think, but then again, she makes the same noise everytime she sees the cat, and it sounds, if you stretch your ears to the back of your head and hold your left arm up just so, like "GA!" which I consider to be Close Enough. So she's talking, fine. Yes! Add one more to the chorus of my God, I can't hear myself think with all the voices talking at me at once.

On the farm front: I think someone ate Rosencrantz sometime this winter. Alas. I knew him well. ahem. I gave Guildenstern to the shearer when he came, and then my sheep died, so that was nice. The running theory is that the ewes had toxemia and I put that down to poor management. I'll know better next time, and that means I'll find a new way to kill the next batch. Marley probably succumbed to worms. The ewes had three lambs between them, all just about due. So that's what, a 200% loss?

Crazy Betty is setting on a new batch of eggs, and I hope they will all hatch safely. I'm not sure how they'll get out of the nest box, elevated as it is, but I suppose I can deal with that when it comes.

We're drowning in eggs. I think there is a gross of them on the porch. We have one hen who produces olive-green eggs. I wish I could figure out which one it was; I'd like to ID her. In the meantime, I'll just keep them by for incubating.

I put out the call for chicken and turkey orders. It's hard to know what to price them at without knowing how many I have to order, but people want to know how much I'll be charging. I may just ballpark it.

Perp is having a grand time in kindergarten. She turned 6 last week, dude, and I'm still having a hard time wrapping my head around that. Six. She got a bike for her birthday and has mastered riding up and down the apron of the garage and coasting back down.

Dude also got a bike for his birthday (4!), and he's slowly learning to manage it. More importantly, he got to see the end of Bad Rooster.

Bad Rooster made a big impression around here.
He would pretty much attack any one of us, mostly from behind, and around here, mean people get eaten. 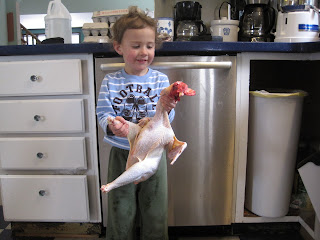 So we ate him. And it was good. And Dude was happy the end. 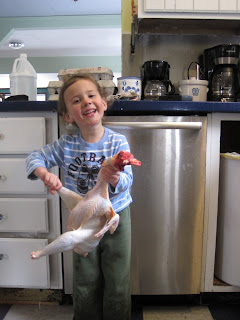