Can you hear the howling, Clarice?

Okay, that title will prove to be completely inappropriate, but I kind of like it. Shut up!

Perp was washing her doll, Coyote last night, and I realized, oh my god God, she named her doll Coyote. What the hell? Where on earth did that come from? Then I realized, hell, she already has a doll she named Yes (very popular with the boy dolls), an invisible friend named Trupe/Troop/Troupe (she can't spell it so I don't know), another invisible friend called Commando, an invisible dog named Buster. Quite the stable. She also demands that we role-play. Recently, while under her weird mind control, I spent an hour being Gus, a classmate of hers. I like him. He likes to lie on the floor and pretend to sleep. Imagine the coincidence, so do I!

Perp and Dude are watching the Street, as they are wont to do every morning. I don't love the idea but what the hell, we're Amerian parents and we may as well buy in. Aaaaanyway, call me crazy, but I think Mr. Noodle just missed taking a ride with Travis Bickle. WTF?

Posted by Northwoods Baby at 7:34 AM 0 brilliant observation(s)

the Magic Eraser. Yeah, it's good for cleaning walls. It's suitable for removing crayon from various surfaces. It's even showing up on the heads of mops (though that seems like a spectacular waste, given how fast they fall apart). All this is true, yes.

Here's what I bet you didn't know: the Magic Eraser, glory of glories, will remove ground-in, dried-up poop from your bathroom grout.

Don't ask; I have no idea, either.

Sometimes I surprise myself

I've been looking--off and on--for at least a year, for this story Husband and I heard on NPR a few years ago. It was about this guy who was hitchhiking to a bluegrass competition and got picked up by a young couple and their various adventures together. All I could remember was that the young man could jimmy open Coke machines (v proud of this fact) and his girlfriend was a shoplifter and the story was HYSTERICAL.

And tonight, after whining about it on Ravelry's NPR group, I found it. I found it!

I'm so disappointed. I posted this at 7:13 this evening

Baby ate meth, the explosion was because the parents were cooking up a batch.


Between that and the deer last week, I'd say this show has officially jumped a very large shark.

Approximately four minutes later, lo. And behold. I am prescient.

Either that or the writers are on a SERIOUS plot vacation. Or both, but whatever, now I have space in my season pass queue.

If you don't take a nap, I'm going to lose my shit. Seriously. I mean it.

Please. Work with me on this. 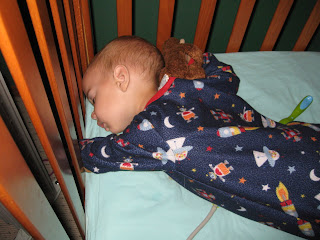 Thank you for your consideration,
Mama