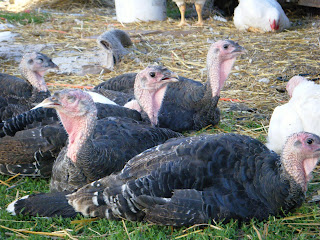 Thanksgiving dinner takes a break from pooping in my car. Time for a nap!


Marley is a Lincoln/Wensleydale ram, about 5 years old. He's pretty wild but took some sheep treats out of my hand today. I feel like a winnah! 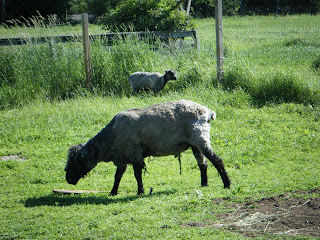 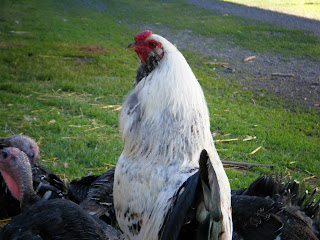 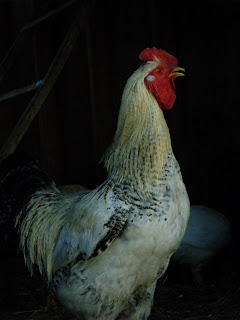 Guildenstern is without question second banana in this production. Unnamed ewe. She's the mother in this pair. Given her Siamese-like color points, I'm tempted to call her Anna (that may be a somewhat obscure Hollywood musical reference unless you're my age or older but I really hope not). Husband would like to call her Eff. Eff ewe! You can see her (also unnamed) daughter behind Marley in the first shot.

Well. So things here at Moot Pointe aren't going quite they way we'd planned, but there are changes.

A friend of mine came over a couple of weeks ago and helped me build my raised beds. Husband and I had ordered three pallets of concrete blocks which were sitting and sitting and sitting out by the pond. Every time I walked past them I thought about how it was going to take me all summer to build these beds and what was I thinking, why not just use the damn treated wood and get it over with, the usual self recrimination refrain.

But! In one day we got three beds built and chipped wood mulch put all the way around two of them. AND two beds filled with soil, two more with chicken litter. Hot dog!

Bed 1 has tomatoes, peppers, and herbs, bed 2 has squash and cantaloupes. We'll see, but so far the kids in Bed 1 are going ganbusters. It also rained off and on since last night, including a lovely shower just this morning.

Tomorrow I go to examine some sheep. Yeah. We're expanding. We don't have any pigs as of yet, and it's looking like we probably won't, so that time can be well spent learning ruminant theory. I'm looking at a ram, two or three ewes, and a couple of wethers, one for the freezer and one to keep the ram company when he's beign separated from the girls.

To help prepare for the sheep, I went on my first pasture walk on Saturday. What a revelation! I found out about several fabulous extension programs (free grazing plan! fencing grants!), and met a few people I may be able to learn from. I have a grazing planner coming on Wednesday; I'm all 'splody with excitement.

The chickens and turkeys are going well, and the first appointment at the slaughterhouse is on the 30th. I'll be taking about a dozen birds in, far fewer than I'd scheduled (and purchased). Second date is the end of next month, then the turkeys go mid-November. We primarily planned to send them because we can't manage that many birds on our own in a day or two, which is how much time we have to work with since Husband has a full-time job. But then we discovered the Whizbang Chicken Plucker (also on the pasture walk). That sucker can pluck a bird in 15 seconds! I ordered the plans yesterday so I expect they'll come this week. Youtube had some fabulous videos, including one plucker made from a washing machine. Chaka like. We really could do a large number of birds in a day if we didn't have to pluck them by hand. It's the worst part, imo. I totally don't mind gutting.

According to state regulations, we can sell up to 1000 birds a year directly to customers with no USDA inspection. With a plucker, it doesn't even sound crazy. I think, though, that if we were to start selling, I'd move to a slower-growing bird, like a poulet rouge or a heritage breed. Don't get me wrong, I like the Cornish X we've been raising just fine, but if we're going to do this for money, I'm going to pull out all the stops and raise for the market, which is for heritage birds. They only take a couple of weeks longer than Cornish X, but they can reproduce on their own and many are better at utilizing pasture. Might as well do what brings in the most money. The farm we went to for the pasture walk only raises Americauna chickens because they get a premium for the blue/green eggs. Crazy but true.

We haven't decided on how to handle the pig situation yet. We could buy feeders from someone else, but I'm kind of tempted to leave it alone this year. I'd love to have the meat, but to only have to deal with one large animal type at a time is immensely appealing. In the meantime, I'm rendering lard from last year's batch. It looks like it's going well. It doesn't smell bad at all, which seems to go against everything I've read so far, but I still have to get cheesecloth to strain it.

I've decided to start keeping records of what goes on, farm-wise. I think it will be interesting to go back and see what we spent and did from year to year. Then, when I get crazy and try things like grafting and incubating eggs in the basement (which I hope to start tomorrow).

So, that's my quick farm update. Oh, we also got a pair of Muscovy ducks from a friend and they're doing really well. I think they may be gearing up to set up a nest. Throw a whizbang plucker into that mix and you'll find a very happy me.

Posted by Northwoods Baby at 8:36 AM 2 brilliant observation(s)