Hey! Hi! Hello, there! Um, I have no excuse. Other than having three children under the age of 5. Jabba the Baby is 3 months old today and I can't for the life of me figure out how that happened. While the days sometimes seem e n d l e s s, the weeks and months just fly by. 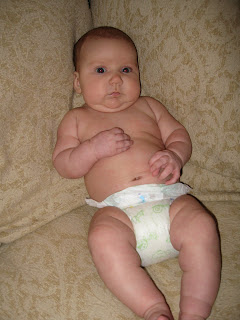 She's figuring out how to suck on her hands, oh happy day!, and is still a fantastic sleeper. Except when we put her down for the night in the cosleeper. Then, not so much. I have to say, I do love sleeping with my babies, but it means that the sleeping part of the night is fragmented and not so great. So I'm always looking for a chance to catch a cat nap. Or a sloth nap, that appeals even more. I know it'll come, I mean, she hasn't even organized her daytime sleep very well yet, so expecting her to get it at night may be asking a lot. But I'm looking forward to it, oh yes I am. 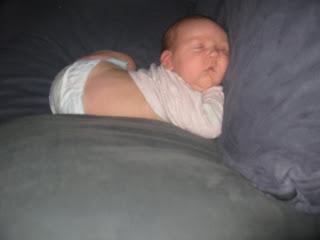 She's a champion puker. Like, if she were a cat, she'd have the horking down pat.

I've cut myself down to eating chicken, sweet and white potatoes, rice, tea (no caffeine, alas), 7-up (don't ask me why), and a few fruits. Still with the puking. And lest anyone think I'm being dramatic here, this is NOT spitting up a lot. This is dry-heaving, projectile, pyloric vomiting. Several times a day. Sometimes I can see it coming and get her to the sink, but generally it just comes out of nowhere. Could it be HFCS from the soda? I know she doesn't like dairy because she screams like we're pulling her spleen out her nose. Wheat seems to be a problem too, and given Dude's adventures in gluten-free land, I guess I'm not surprised.

There is a stomach bug going around, and I am allowing for the possibility that her continuing to vomit is related to that, but I don't know. If it hasn't cleared up by the end of the week, I shall freak.

Last month, I took her to visit her Auntie 6 in San Diego and we had a marvelous time. We ate hole-in-the-wall Mexican, fantastic Thai (like, I'm still fantasizing about that soup), and a lovely prix fixe meal at a spot on the harbor during restaurant week. And while we ate, we talked about what we were going to eat next. I brought out a couple of shoulder roasts from our pigs and she and Latrell Soulpatch had one for dinner after I left. I hear it was good. 6 was even willing to touch a baby. It's the end of times, I'm telling you. 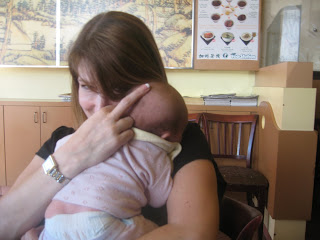 I'm taking all three (three!) kids to VA in April to visit my famdamily, and I can't decide if I'm crazy or outrageously brave. Maybe both? I have to call the airline and see what kind of services they can provide to keep me from killing one or all of them. I hear that TSA will sometimes allow someone to accompany groups like mine to the gate. Gopod, I hope so. Just getting all three car seats to the gate puts the fear of I-don't-know-what in me. Husband is coming out for the last half of the trip and we'll all go back home together.

Posted by Northwoods Baby at 11:38 AM

She's adorable!! Adjusting to 3 was difficult for me so don't feel bad for not posting for awhile. I hope you get the vomiting thing figured out!